Savory Stew for You!

For Christmas this year, I made a big spiral-sliced ham for the extended family. After the dinner was over, I put the hambone and leftover ham into a Ziploc bag and told it, "I don't know what I'm going to do with you, but I'm going to do something." It's true. I talk to my food sometimes.

I decided to make a split-pea soup. It just appealed to me, after many days of cold rainy grayness. When I went to Wal-Mart, they had no split peas. None. All I could find were lentils, but I decided to give it a try.

The results were pretty yummy. Very hearty, very savory, very filling, and very warming. I kept up with the ingredients as I was creating it, just so that I could share it on my blog! 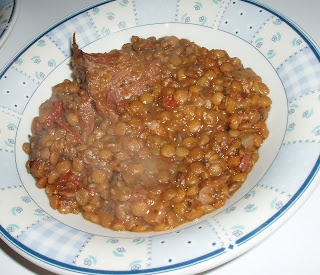 Add all ingredients to a large soup pot. Add 4 cups of water. Bring to a boil, stirring occasionally. Simmer for several hours, or transfer to a Crock Pot & cook on high for several hours. It will thicken as it cooks. I cooked mine pretty much all day, so it was very thick and yummy. (Recognize the bowl, Tiffany?)

And what's a stew without cornbread? This is my favorite way of making cornbread, but I can't really call it a "recipe. Basically, use two boxes of Jiffy cornbread mix, add a full-size can of cream-style corn, eggs, and enough milk to make it right. (I don't know the amount of milk. I know it's less than what's on the box, since you're adding the cream-style corn.) Bake as directed. 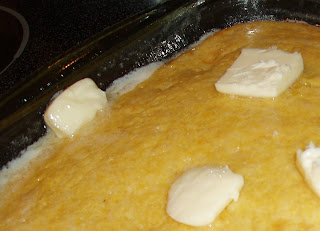 But the secret ingredient?
Butter. Real butter. Land 'o Lakes butter. A whole stick if you want really good cornbread, less if you have heart disease or want to live past, say, 40. Cut little bits of butter all over the top of your fresh-from-the-oven cornbread, and let it make little pools of golden sunshine all over the top of your delightful, slightly-sweet, very moist cornbread.
And yes, butter makes me poetic.
**UPDATE** The stew recipe freezes well! After I wrote this post, I had a hankering for some, so I pulled it out of the freezer & made it for lunch - it was great!
Blessings, Jeni at 11:59 AM

Email ThisBlogThis!Share to TwitterShare to FacebookShare to Pinterest
Labels: recipes