Since Wendy is approaching 3 years old (a fact I have a hard time believing), I've been working with her more on her basic preschool-type skills. Numbers, letters, colors, shapes, etc. On a recent trip to Toys R Us, I found these big magnetic letters by Melissa & Doug: 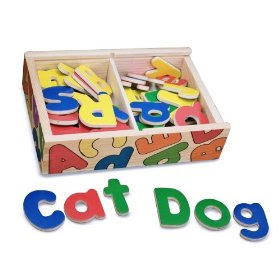 The letters are wooden with a magnetic backing on the whole letter, which makes them much sturdier than those cheap little plastic fridge letters. There is a full set of upper- & lower-case letters, and it comes packaged in a nice wooden storage box with a sliding lid.

Instead of using these letters on the fridge, I got a magnetic dry-erase board at Target. It's about 12 inches by 16 inches, and was less than $5. It isn't quite big enough for the whole set, upper- and lower-case, but it's plenty big enough for one or the other. We've also been spelling out simple sight-words, like Wendy's name - as long as it only uses one of each letter, we can spell it out.

This morning, I put the upper-case alphabet on the board & sang the ABCs for her while pointing to the letters. Then she took away letters & I sang again, skipping the letters she had removed. (Think "B-I-N-G-O" without the clapping.) We did this until we were down to four letters, and then we put them all back. She likes playing this kind of game, and it gives me a chance to reinforce letter recognition & the alphabet for her.

For more recommendations, visit "Things I Love Thursday" at The Diaper Diaries.
Blessings, Jeni at 9:44 AM

We have a set of these as well ... I really like Melissa & Doug products! Thanks for visiting me:)

Those are so cute!!! Marissa will be 4 next month & I'm sure she would LOVE them!!

No I wasn't Sleeping said...

We have gotten to wear I put the letters on our dryer/washer instead of our fridge. It gives Big G something to do so he won't climb the stairs while I am swapping laundry.

I love Melissa & Doug products too! I like the way you sing the abc song. i'll have to remember that.