I first read about her on a blog, and I was intrigued. She sounded like a good idea, but was she worth it? Would David like her? Wouldn't she be just like all the other teething toys we've bought - played with for a few minutes and then tossed aside? It seemed like he would rather chew on his fists than any kind of teether. I went out on a limb and decided to give her a try.

She arrived on Tuesday, and I immediately took her out of the box, wiped her off, and handed her to David.

His eyes got huge, and if he could talk, he would have asked, "Where have you been all my life?!?" He grasped her by the neck, inspected her thoroughly, and immediately began gnawing on her feet.

It was love at first sight. 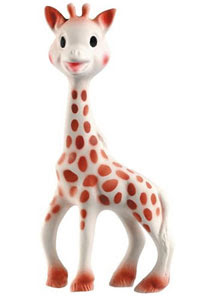 Her name is Sophie the Giraffe. She's made of natural rubber, painted with food paint, and she squeaks pleasantly when her body is squeezed. She's easy for little hands to grasp, and there are many chewable parts - David prefers her feet, but he'll also chew on an ear for variety.

I am so happy that Sophie has joined our family!

For more recommendations, visit Things I Love Thursday at The Diaper Diaries!
Blessings, Jeni at 9:30 PM

What is it with this thing that people rave about it. Seriously, I keep hearing people talk about it. Might have to get my hands on one.

How great to have a toy made from sustainable components.